I like Sally Hansen’s Xtreme Wear line because it is really cheap. Moreover, it’s often on sale, and I can find them for less than $2. So even if after buying and applying a Xtreme Wear polish I suddenly realize I don’t like the shade on my nails, I don’t feel like I wasted money on it.
Today’s nail polish from the line is called Ice Coffee: Can anybody tell me why on earth they named it Ice Coffee? I’ve never seen an iced coffee of this color… Anyway, I like this oddly named reddish brown polish. I would describe it as a rose terracotta shade with lots of subtle golden microshimmer. Here’s a close up pic to show you the shimmering effect that is better seen in the bottle: The formula is very pigmented, not sheer. I needed two rather thin coats to get full opacity, and both coats dried relatively fast.
Today we were lucky to have some sun in the morning, so I used the chance to take a couple of pics of Ice Coffee in the sunlight: And a little bit closer… 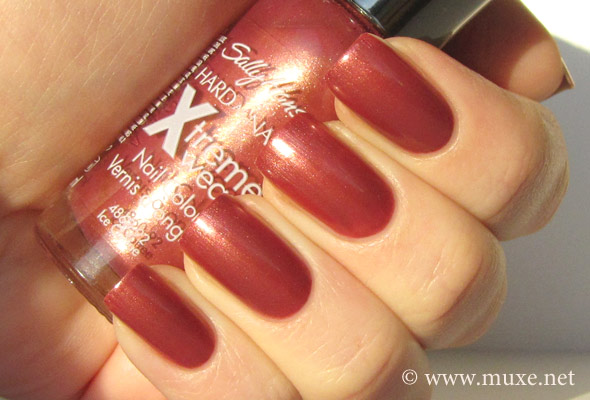 Iced Coffee is one of those fall/winter shades that I would use for toes when I get tired of reds. It’s neutral, calm and goes with almost anything :)