Yesterday when I was going through and organizing my nail polishes, I found a veeery old bottle of nail polish – Sally Hansen Truffle creme. I haven’t been using it for a year or so… tbh I completely forgot about this polish, and discovered now that it’s still thin and fine to apply. I think I bought it at least 3 years ago at the local drugstore — there used to be a big display with Hard As Nails collection and the polishes were fairly cheap.

I’m glad it didn’t get sticky through these years. I don’t use thinners and revivers to restore polishes to new if they become goopy and too thick. I just don’t like the idea… I prefer to toss the old polish and buy another one of similar color… But back to the color — Sally Hansen’s Truffle is a medium brownish shade of red. It can also be described as a very dark neutral shade depending on skin tone.

3 coats of Sally Hansen Hard As Nails Truffle Cream with no top (daylight, no sun, indoors): 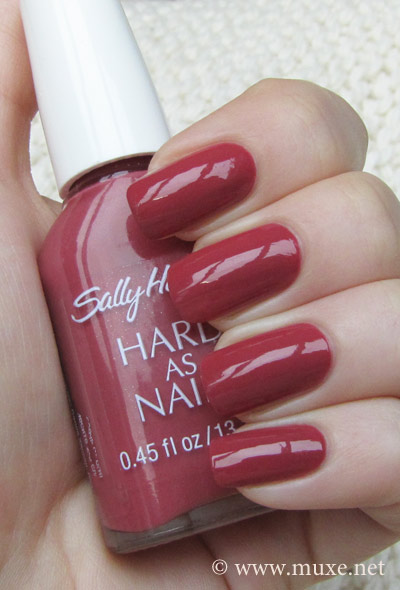 Sally Hansen’s Truffle is a pure cream with a nice glossy finish. The application was very smooth and easy in spite of the thin brush. The first two coats were streaky and the color was not dark enough, so it took me 3 coats to get it completely even and opaque to my liking.

With my warm winter scarf: 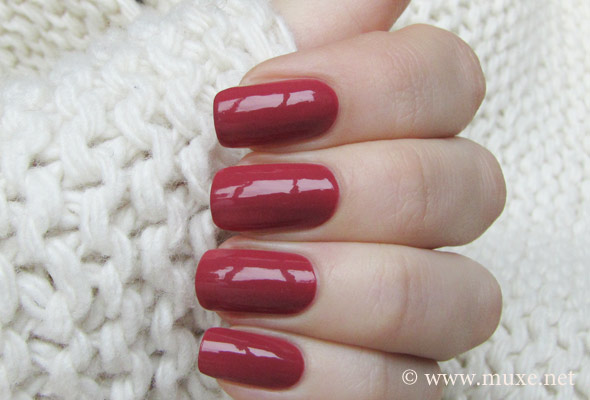 Sally Hansen Truffle is a simple everyday color mostly suitable for fall/winter time. I don’t think I’ll be using it very often, as I tend to love darker colors during winter months, but from time to time – why not :)
I wouldn’t say I like the color so much as to repurchase it, and I think the polish has been discontinued already :/

Btw I woke up today to see snow outside! The winter came to Saint Petersburg. There is white snow on lawns and ice covered puddles, but trees, roads and roofs are still free of ice/snow…